Air Alpha falls, as the championship trophy goes to others.   “We were ready to play”, says first year player/coach Andrew Ramler, a self-described non-athlete. 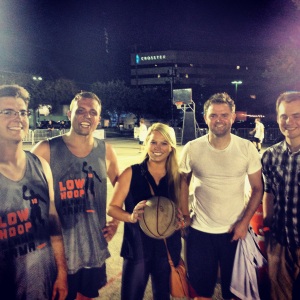 “But it sure would have been nice to have some height, some speed, and some skills”.  Alpha Testing’s team “Air-Alpha”, composed of players from the development, estimating and environmental departments, took to the court and made an amazing run to a first round exit.  Says first year starter Griffin Kane “we are already starting practices for next year.”  Alpha hoops fans Andrew Adams and Ashley Roberts say the level of play from our men was “simply amazing.”